Home | About ACM | The ACM Story

Today, ACM helps the world's largest operating and engineering companies as they strive to make the world a safer place. However, our story started more than 40 years ago.

Ken Bingham, founder and CEO of ACM, spent his first 20 years working within the oil & gas industry as a systems integrator, focused on the design of safeguarding and transmission systems. Ken quickly discovered that while plants were producing the same products, the safeguard systems varied widely, as did the culture. Yet the consequences of accidents were universal; significant impact to people and the environment with high-pressure, high temperatures and toxic, carcinogenic process chemicals.

Even though the idea of everyday safety was something companies recognized and provided workplace training for, it was not appropriately considered in the case of process safety. The understanding and training of plant personnel regarding the design intent and requirements around critical Safeguards was inconsistent plant to plant, with the design and rigor of safeguards often simply replicated as per the last facility. Ken's official wake up call to the shortcomings of safeguarding systems was realized in a fatal sour gas leak involving multiple long-term employees whom Ken had worked beside just days earlier. The situation was hitting too close to home.

In Ken's opinion, industry needed a guideline for safety best practices that took into account both existing risk and acceptable risk. A standards committee was formed out of the instrumentation and control world working hand-in-hand with international standards committees and related organizations out of UK and Germany. It was developed in the 80s and implemented in the 90s. Ken was part of this standards committee for several years during the early times and has been instrumental towards it becoming widely accepted as the only standardized approach to designing safeguard systems; using technology that is integrated with electric, hydraulic systems, mechanical systems and people.

Today, organizations like TÜV, certify companies like ACM to help others understand and implement safeguard standards. Educating and mentoring companies to design these systems, and comprehensively understand when safeguards are required, is still part of ACM's consulting services today.

In the early days of industry adopting these safeguarding standards, ACM designed and implemented small and large safeguarding systems. As the industry matured, ACM did less detailed design and focused more on tools and education to help others with design, maintenance and operations around safeguard systems. ACM now trains hundreds of people every year on applying the standards and certifying these people on behalf of TÜV in the understanding and application of the standards.

ACM also quickly learned that what people needed help with most wasn't just the design and implementation of safeguards, it was conducting a rigorous assessment of “are you safe enough” and understanding all the risks presented by a new or existing facility. If this first step wasn't done with rigor and completeness, nothing else would matter, no matter how many safeguard systems were implemented. Today ACM conducts dozens of these types of risk assessments every month for dozens of different plants and owners.

The approach to risk assessment and applications of safeguard systems has undergone tremendous changes at ACM over 20 years. ACM began to implement work processes, standards, tools, competency matrices and mentoring strategies for all new and growing employees. Today the practice of hiring chemical and process engineers out of co-op programs, giving them a chance to contribute significantly, almost immediately, has proven to be a huge part of our success.

The tools that ACM envisioned and built represent a big part of who ACM is today. ACM focused on building software tools and software based systems that were able to act as highly trained risk identifiers and communicate findings and recommended solutions in a way that the average operations employee could understand. Furthermore, ACM built software with the ability to monitor risk while it is running in real time, allowing for predictive and measured risk data that eliminated the need to see trip systems activated and delays in production.

Today, operators can use systems built by ACM to monitor their risk in real time, taking action weeks and months before a problem surfaces. We have begun equipping operators to predict the future integrity of safeguards by monitoring threats to the integrity of the safeguards.

In the early months of 2007, a new management team consisting of Greg Lingelbach, Tom Labodi, Marcel Leal-Valias and Ken Bingham came together to form ACM as it is today, and collectively embraced a mission to continue to lead a safety industry revolution.

In 2012 ACM introduced the Institute of Hazard Prevention where experts in safety educated those invested in safety, equipping them with the knowledge and credentials required to make a difference, regardless of where they or their company was currently in their own safety lifecycle.

Today, as the largest company focused on process safety, ACM runs a business that provides standards-driven risk management by offering education, consulting services and software solutions to individuals and organizations, over a wide variety of industries, that want to help make the world a safer place. 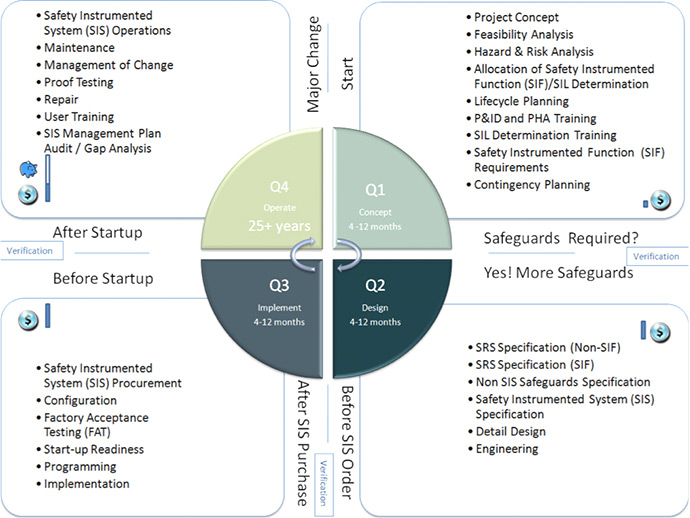 We'd love to hear from you.